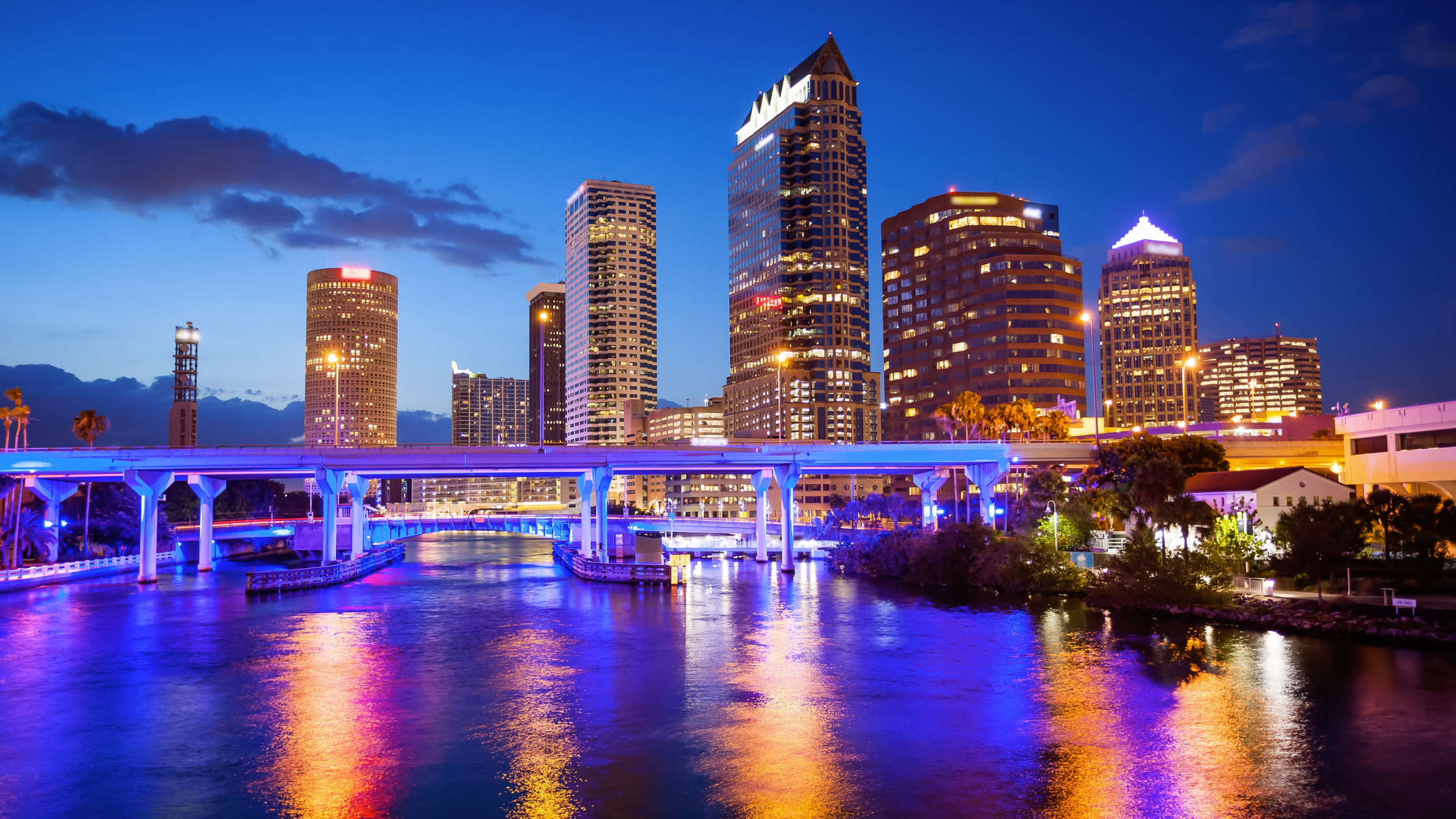 Why do boaters LOVE Tampa Bay?

The reasons may vary, but the fact remains; boaters LOVE Tampa Bay! It’s one of the most popular boating areas in the entire country. What makes it so popular? To name just a few reasons; the sheer size of Tampa Bay (Florida’s largest estuary), the many tributaries flowing into it, the proximity to the Gulf of Mexico, the size and diversity of the boating community, and the endless boating activities and destinations. 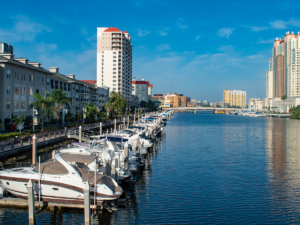 We would be remiss if we didn’t also mention the natural beauty of the Tampa Bay region – its beautiful water, wildlife, and natural sandbar formations. Even with its remarkable popularity and vibrant culture, Tampa Bay still offers boaters pristine beaches and environments where you can get away from it all.

There is so much to experience around Tampa Bay, on the water and ashore, you could boat for years and still have new places to visit and explore. Of course, everyone seems to have their favorites. But one thing all boaters can agree on is that there’s no better way to see Tampa and the surrounding area than by boat.

Getting the most out of Tampa

The city of Tampa was designed for fun and relaxation. Life there revolves around water and picture-perfect weather. Plus, the downtown is brimming with dining, shopping, and entertainment. Add great amusement parks, golf courses, water sports, and endless beaches to the list and you’ve got a world-class boating vacation destination.

For boaters, getting around downtown Tampa is a breeze. You can get any place you want to go quickly and easily with HART’s new streamlined bus network and the TECO Line Streetcar. However, those are not your only options. You can hop on a well-planned walking and bike path route, grab an e-scooter or summon an Uber or Lyft.

Places to go in Tampa

Tampa’s arts and culture scene is second to none. The selection of theatres and museums is impressive. Your biggest dilemma will be figuring out how to do it all. A terrific place to start is The Dalí, the renowned Salvador Dalí Museum. It’s home to an unparalleled collection of works by celebrated artist Salvador Dalí. You can pass an entire afternoon marveling at his iconic melting clocks, and other imaginative visual illusions and avant-garde symbols. 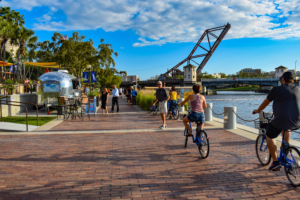 Any one of Tampa’s beautiful sunny days is a perfect day to spend on The Tampa Riverwalk. It’s a 2.6-mile-long open space and pedestrian trail along the Hillsborough River. Before you go, explore it virtually for yourself.

If you and your crew are looking for the ultimate family adventure, Busch Gardens Tampa Bay has just the thing. It’s a sprawling 335-acre African-centered animal theme park. What you’ll find there are scream-worth thrill rides, live entertainment, and more than 12,000 animals.

Tampa Bay offers boaters a wonderful and diverse variety of places to drop anchor and chill. Some prefer the channels where the shoals begin, or off the shore of any beach. Others think it’s far more fun to anchor off of the numerous islands and keys where other boaters gather and make new friends.

In the heart of Tampa Bay, not far from Apollo Beach, is Beer Can Island. On the map, it’s actually listed as Pine Key, but it’s also referred to as Tiki Bay or Tiki Bay Island. No matter what you call it, it’s a boater’s playground. Only accessible by boat, it’s a popular destination for boaters to pull up, drop anchor, hang out in the sun, barbeque and crack open some cold ones.

Passage Key, or Naked Island, sits between Anna Maria Island and Egmont Key. It was once a disappearing sandbar, but time and many tides have built this little Key into a bona fide island. Today it’s admired for its sugar sand, native grass, and sparkling blue-green waters. Although it is a National Wildlife refuge, it has always been a boater’s hangout.

If you want to anchor on the Gulf side, you can sail to Shell Key. It’s a barrier island in the mouth of Tampa Bay. A wildlife preserve, boaters go to this location for solitude, wildlife, and shelling – quite the pastime in Florida. 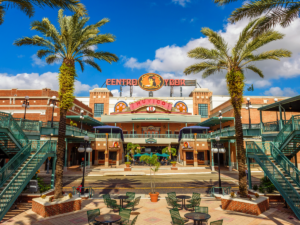 Located right on the riverwalk in Tampa, near the Tampa Convention Center, is The Sail & Big Ray’s. The docks right out front allow boaters to pull up and fill their bellies with everything from fried shrimp to frozen mojitos. Plus, with 360-degree waterfront views, it’s also a treat for the senses.

Rick’s on the River draws boaters from far and wide with its unique beverages and atmosphere. They do serve food, but the real attraction is the fact that you can dock your boat and enjoy great live music and cold drinks with other boaters.

If you’re craving an authentic Cuban sandwich or mouth-watering Pallella, the Columbia Cafe is your place to dock and dine. Located inside the Tampa Bay History Center, this restaurant is part of the string of Columbia restaurants that are hugely popular in the area.

Because Tampa Bay is a boater’s paradise, it’s also home to many excellent marinas. Here are just a few standouts:

The Marriott Tampa Water Street Marina in Tampa, located on the Garrison Channel of Tampa Bay, offers 39 full-service slips right in front of the gorgeous, waterfront Tampa Marriott Water Street Hotel. Right in Tampa’s downtown, boaters are just steps away from attractions like the beautiful Tampa Riverwalk, Florida Aquarium, Amalie Arena, and the Sparkman Wharf. Packed with amenities, this downtown Tampa marina has everything you, your boat, and your crew could want.

Just north of Port Tampa, Westshore Yacht Club in Tampa features 149 slips on Old Tampa Bay that can accommodate vessels up to 108’ LOA. Along with a long list of amenities, you’ll be pampered by the marina’s salon/spa, swimming pool, fitness center, and health club. You can grab a bite to eat on-site at the Tiki Bar or head to one of the nearby restaurants including Hula Bay Club and Salt Shack On The Bay. Just a short drive brings you to the Florida Aquarium, Tampa Bay History Center, and Glazer Children’s Museum – so there is something for everyone to enjoy.

Located off of the Little Manatee River is Shell Point Marina in Ruskin. Close to  Tampa, St. Petersburg, the Skyway Bridge, and the Gulf of Mexico, this marina offers beauty, peace, and quiet, but keeps you close to all the area has to offer. Plus, the fishing is fantastic! The marina has a generous list of amenities, 44 slips and can accommodate vessels up to 70’LOA.  Under 5 minutes from the open bay, this marina is a great place to drop anchor and take it easy.

Jo is a lifelong boat lover and writer. She learned the ropes of boating on her family’s 36’ Carver at the Jersey (joy-see) shore. With over 30 years of writing under her belt, she delights in seeking out, and sharing, the things most important to fellow boating enthusiasts. Jo now lives in Connecticut, near the water she adores, with her husband, two children and large, hairy dog. She is over the moon to be part of the Snag-A-Slip crew!