Who’s ready for summer? We are! The sunshine is making a regular appearance these days – and we’re ready to go boating. Our friends over at Marinalife compiled this amazing list of boating destinations on the Mid-Atlantic, so we thought we’d share them with you. Without further ado, here is our 2018 Mid-Atlantic Boating Destination Guide:

The Hamptons is a unique amalgamation of seaside hamlets and villages, surrounded by white sand beaches with dramatic dunes. Old World charm peacefully coexists with upscale glitz, producing some of most expensive ZIP codes in America. Land that once grew potatoes now yields grapes for vineyards such as Martha Clara, Duck Walk and Channing Daughters Wine. Its golf courses are first-rate and local restaurants draw some of the world’s top chefs.

Docking: On Three Mile Harbor, Halsey’s Marina offers space for yachts up to 75 feet and clubhouse access along this quiet, picturesque marina basin. Neighboring Gardiner’s Marina can accommodate yachts up to 105 feet. If you’re looking for a boat slip in Westhampton, look no further than the resort style Ocean Resort at Bath and Tennis.

Sag Harbor has morphed from a 19th century whaling port to a lively destination. Quaint cottages and Victorian manors line the streets next to boutiques, galleries and many of the region’s best restaurants. The cool waters that surround pristine beaches create an ideal climate for growing crisp, briny oysters. As the hub of dining and nightlife, you’ll find a plethora of going out options, from trendy nightclubs and intimate lounges to cigar bars and lazy-day dock bars.

Docking: Near the historic village center, Sag Harbor Yacht Club provides berths for vessels up to 200 feet and fuel.

In 2011, New York launched a 10-year plan to revitalize the city’s 520 miles of shoreline. New waterfront developments are bringing the beach back to this urban island where skyscrapers loom in the background. Pier 25 Park on the Hudson River infuses the Lower West Side with outdoor fun including mini-golf, volleyball, skate park and landscaped green areas. Governor’s Island, a former military base, has been converted into an historic site and recreation area with bike paths, ballfields, outdoor concerts, sculptures and a grove of red hammocks for relaxing. You’ll find lots of new boutiques, bars and great places to eat near the water without cruising into Midtown’s sea of humanity.

Docking: Located on the Hudson River, vessels up to 350 feet can tie up at MarineMax at Chelsea Piers. Access New York’s ultimate playground including Chelsea Piers Fitness, offering everything from an indoor pool and track to ice rink and soccer fields.

The four-mile long boardwalk is America’s first seaside promenade and the lifeline to entertainment in this high rollers’ heaven, where you come across everything from saltwater taffy to blackjack tables. The Playground offers high-end shopping, from Burberry to Louis Vuitton and a water show of dancing fountains. The revitalized Marina District is a beacon of nightlife centered on resorts such as Harrah’s Resort Atlantic City, The Borgata Hotel Casino & Spa and the luxurious boutique Water Club Hotel. Nearby are iconic attractions including the Monopoly Monument (a giant version of the board game) and Lucy the Elephant (a 65-ton building erected in 1881 in the shape of an elephant).

Docking: Senator Frank S. Farley State Marina at Golden Nugget Atlantic City Resort has dockage for vessels up to 300 feet, as well as 630 floating slips and ValvTect fuel. If you’re looking to dock a little further from the crowds (we don’t blame you!), consider Kammerman’s Marina!

Docking: Baltimore’s Inner Harbor is home to revamped Harbor East Marina with proximity to the city’s finest retailers. Yachts up to 200 feet can be accommodated. Tidewater Yacht Service, located in the growing Port Covington area of Baltimore, is a full service boat repair and service center with dockage for yachts up to 200 feet (18-foot dock depth). Baltimore Yacht Basin in Port Covington is also a great stop as it’s home to Nick’s Fish House, one of Baltimore’s best tiki bars and seafood restaurants.

Annapolis is steeped in rich Colonial and maritime heritage that attracts hoards of history buffs who get to relish its graceful charm. A trail of unique boutiques and eateries lead from the governor’s mansion down the hill to the City Dock where boats of all shapes and sizes bob in the water. Across Spa Creek Bridge is Eastport, a charming seaside community that once prospered from the ship-building industry. Today its narrow streets are lined with vintage houses and local watering holes.

St. Michaels is one of the loveliest local harbors thanks to Victorian homes, historic churches and sites, and specialty shops. The Chesapeake Bay Maritime Museum presents regional history through interactive exhibits. Quench your thirst with Lyon Distilling Co.’s small-batch rum and whiskey or Eastern Shore Brewery’s craft beer. The Inn at Perry Cabin offers an elegant retreat with a spa that will gently rub away your worries.

For decades, DC has been committed to sprucing up its waterfront. National Harbor was the first new venture with 100+ shops, restaurants and hotels. Next for restoration was the Navy Yard, which has packed the streets between the Nationals’ baseball stadium and U.S. Navy Museum with restaurants, bars, a brewery and winery, and a pedestrian trail along the Anacostia River. At The Wharf, development for Phase 1 is complete along the Potomac River, retaining the beloved Maine Avenue Fish Market but adding hip music venues, pubs, restaurants, boutiques, an indie bookstore and more — all in walking distance to Smithsonian museums and monuments.

This magnificent example of urban landscape architecture takes you above the streets of Manhattan’s West Side on an old elevated freight rail line through a public park filled with thousands of gorgeous flowers, trees and sculptures, while offering unforgettable views of the Hudson River.

Co-founded by Robert De Niro, the week-long event holds screenings, lectures and interviews with the movie industry’s A-list and newcomers to showcase the latest documentaries, features and short films (April 18-29, 2018).

As the oldest incorporated golf club and one of the five founding members of the United States Golf Association, Shinnecock makes the most of the region’s natural topography. The private golf club is hosting the U.S. Open Championships this year.

This outstanding marine life sanctuary holds 20,000 different animals from bullfrogs, clownfish and seahorses to crocodiles, stingrays and sharks. Special exhibits of coral reefs, rainforests, jellyfish invasions, extreme Australian wildlife and daily life of dolphins are interactive and engaging. Friday nights at the National Aquarium are half off!

Bringing the top talent from the American and National League, the 2018 Major League Baseball All-Star Game is set to take place at Nationals Park this summer (July 17, 2018).

For three days on Maryland’s Eastern Shore you can watch a flotilla of hot air balloons soar up into the sky. Located in the town of Cordova at the Triple Creek Winery, you can sip a chardonnay, listen to bands and take a tethered balloon ride (Aug. 3-5, 2018).

At this newcomer to the Navy Yards, you can take a tour through the metal tanks and wooden casks to observe the process from vine to bottle with grapes grown across the nation. Pick your favorite of its seven wines.

In 1950, Arena Stage put on its first show in an old movie house and later moved to the gymnasium of the former Heurich Brewery. Today its home is across the street from The Wharf in a renovated performing arts complex. DC’s local cultural treasure is a pioneer in regional theater and continues to produce plays by American writers.

This festival presents the jazz world’s most acclaimed artists to emerging talent from around the country and DC metro area. The schedule is filled with 125 performances and 40 venues (June 8-17, 2018). 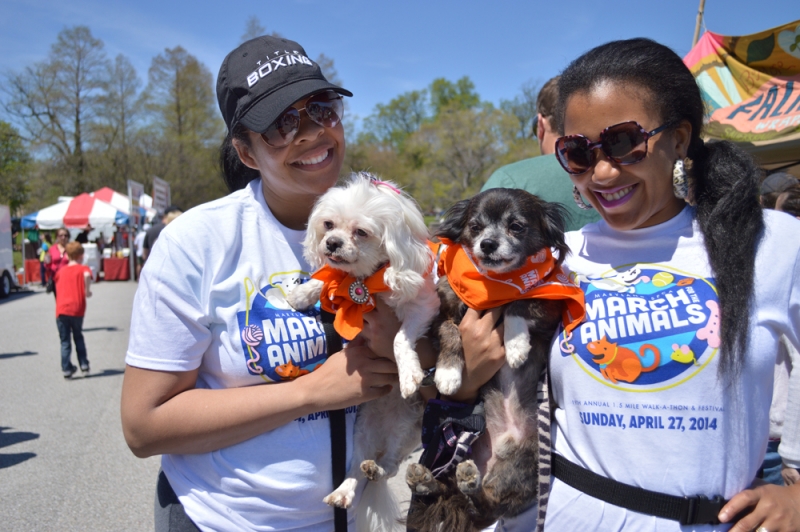 Join Us at the Festival for Animals in Baltimore!

Join Us at the Festival for Animals in Baltimore!