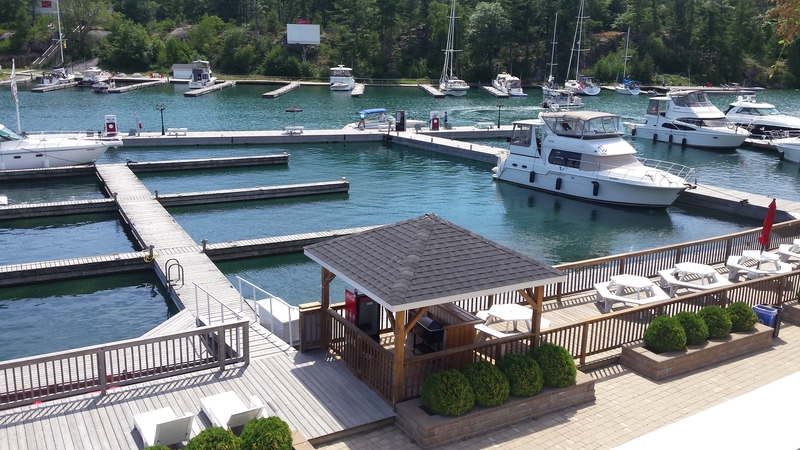 You Will Leave Breathless After Staying at Sportsman's Inn and Marina

Situated along the beautiful granite shores of the Killarney Channel, the Sportsman’s Inn Resort & Marina is a legendary landmark destination for boaters headed to or from Lake Huron’s famous North Channel. Located miles off the Georgian Bay in Killarney, Ontario, Canada, this marina is a fantastic getaway with amazing resort-style facilities and amenities. The marina offers 140 slips and can accommodate vessels larger than 100 feet! Conveniently, this is an authorized Shell Distributor of Fuel facility, offering a large selection of regular gas and diesel to suit your boating needs.

There is so much for you to do during your stay at Sportsman's Inn Marina, making this a busy, yet relaxing vacation. Enjoy a swim in the beautiful pool that overlooks the marina, or catch up on a good book in the complimentary lounge chairs on the surrounding sundeck. Want the ultimate relaxation? Treat yourself to a spa day at the marina's Island Spa for upscale treatments and massages.

You will not have to leave the marina for lunch and dinner because there are two restaurants onsite to accommodate you. The Inn’s stately dining room and dinner service exudes elegance, or you can stop by the pub anytime for a casual and fantastic selection of breakfast, lunch and dinner options. The marina now offers an outdoor dockside patio, allowing guests to enjoy food and drinks in the outdoors with a gorgeous view of the crooked pines, the setting sun and the Channel.

Cancellation Policy: If notice of cancellation is received 2 weeks or more prior to the scheduled arrival date, guests can expect to receive a full refund for their deposit. With less than two weeks notice, deposits are held and may be applied to a future stay (within 1 year of cancellation) up to 48hrs in advance. If cancellation occurs within 48 hours of the reservation, an amount equal to 1 night is forfeited. Those who simply do not show up and abandon their reservation will be charged for the full amount of their stay. Early departures are not refundable.

Pets: The Sportsman’s Inn is a pet friendly resort! Designated rooms are available for guests who travel with their furry friends. A surcharge of $25 per day will apply for each pet. We ask that you are considerate of the other guests at the Inn and take care to clean up after your pet. Pets are not permitted to relieve themselves on the deck of the Motel. Unregistered pets are a $35.00 surcharge.

Garbage & Recycling: Help keep Killarney green! At the Sportsman’s Inn we take every effort to recycle and take pride in being a clean, environmentally friendly resort. Blue Bins for recycling can be found in all public areas and rooms. Clear recycling bags will be provided to our Marina guests. Please follow recycle guides posted in each room. Thank you for your co-operation.

Smoking: Please note that the Sportsman’s Inn is a non-smoking resort. It is strictly prohibited to smoke in the rooms, balconies and public areas. Please use the designated smoking areas on the grounds.

We were lucky to get a slip at The Sportsman's Inn since other marinas (e.g. Killarney Mountain Inn) were full. We had planned to go to Covered Portage anchorage, but tucked in to the marina for 2 days due to an expected thunderstorm and winds up to 40 knots the next day. The marina has floating slips on 2 sides of the channel. Our side had only 2 bathrooms and 2 showers, which were not enough for the number of boats. Additional showers and paid laundry were across the channel. The internet was spotty at best. Fuel was the most expensive that we've seen on the Loop. Restaurants and a small grocery are within walking distance. We were disappointed with this marina since we felt it was too expensive ($2 per foot + $20/night for 30 amp power + a required $10 per night for a "resort fee"). We were told that the resort fee covered the bathrooms, showers, laundery, water taxi, garbage (which are normally covered with the nightly fee) and use of the canoes, pool and grounds at nearby Killarney Mountain Inn. We felt that the resort fee should have been optional since we didn't use the Killarney Mountain Inn amenities.

Cannot say enough about Killarney - great place! Nice marina and fun walk to other property. Bakery nearby has great fritters and fresh bread. Take a walk to see the big oar!

Was slightly surprised with the incremental charges not divulged upon earlier booking. Somewhat surprised at the dock assignment after requesting bow in, portside dressed ?

Snag-A-Slip reached out to the marina manager for further comment but did not hear back regarding this review.

There are slips on both sides of the canal. On the mainland side (by the lodge) the slips are older and narrower. On the George Island side, the slips look and feel new, with good electric and wide slips. i recommend staying on this side. The marina provides a water taxi to take you across the 200 yrd channel with merely a call on channel 68 or a phone call. No hassle all.

They also have bicycles and water paddle boats free of charge for your use. In 2018, they charged $2/foot PLUS $30 for 50 amp service. A bit pricey, but not totally uncommon up here.

Beautiful marina. We didn't stay here but I walked over to check out the facilities. The bathrooms and laundry rooms were clean and the facility was so pretty....we ended up getting a couples massage at the spa. If we hadn't stayed at the Killarney Mountain Lodge - this would've been the next best thing!

To book on Snag-A-Slip and earn rewards, explore these nearby partner marinas & private listings!
Marinas in The Georgian Bay