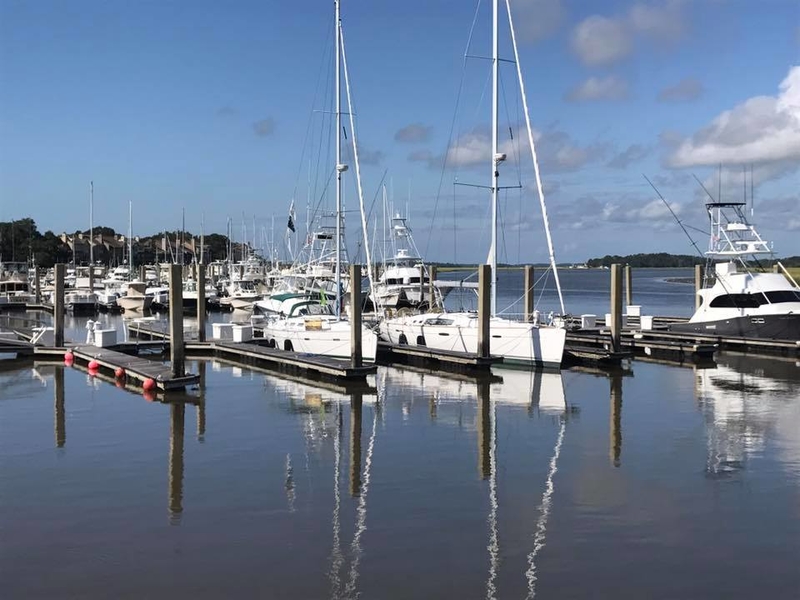 A slice of paradise at Bohicket Marina & Market

Bohicket Marina & Market in John's Island, South Carolina is a premier marina just a short drive from Charleston, SC and right in-between Kiawah and Seabrook Islands. With 200 boat slips accommodating vessels up to 150ft., this marina is perfect for your OBX get away. Amenities for this property include restrooms with showers, laundry, internet access, and more. With easy access from both the ICW and the Atlantic, there's plenty to explore. John’s Island offers many attractions including beaches and water activities such as a speed boat adventure. Enjoy a day on the water whale and dolphin watching. After a day outdoors, head over to a local restaurant ranging from fine dining options and quick bites. With events all throughout the year, there's never a bad time to book a slip at Bohicket Marina & Market! Book your boat slip for Bohicket Marina & Market today with Snag-A-Slip!

Very nice. Great help getting docked. As with most places in the region, tidal current can be a challenge when docking. Marina is being upgraded. Restaurants and bars on site and Freshfields shopping just up the road in walking distance.

We stayed two nights and loved it. Quiet and peaceful. A good restaurant, ice cream, liquor store, and tackle shop on site. A big grocery store about a mile away. We ride bikes and the bike trail was a plus!! Also good for dogs! Staff was super friendly. Well worth the trip off the ICW.

What a great marina 8 miles off the ICW. We pulled in and had to stay a few days to replace a faulty transmission hose and were pleasantly surprised by the accommodations and the friendly staff. Two restaurants, laundry, bathrooms with hot showers, a grocery store and shopping village within walking distance. Plenty of deep water and floating docks.

We went to Seabrook island to celebrate my husbands 30th birthday. We booked 2 fishing boats via Bohicket to accommodate all our friends. With the pandemic going on at the time not everyone could make it and had to cancel the 2nd boat BUT we still wanted to instead schedule the boat at a different time so that we didn’t lose our $$$ and still help the captains. We had a couple nurses and pharmacy techs that just couldn’t leave at the time. Unfortunately, they were not accommodating and we had to pay in full and cancel our entire 2nd boat instead of rescheduling for a 2nd day and time. I totally understand the need to stand your ground and pay the captains but not being accommodating in this time of need is so crazy to me, I understand nobody asked for this Covid-19 however, be a human and work with people. Again, totally happy to pay but very disappointed in the lack of hospitality. Maybe we would have had better luck working directly with the captains and not through the marina. They may have been more willing to work with us. Just an FYI in case of emergency. Spend your money elsewhere.

Marina response:
Our staff and Captains put a lot of time and energy into coordinating this reservation for our client since she needed two boats. We were delighted that we were able to line up two captains for her group on the date that she wanted.
I called her after we received an email from the client the day before stating, “We had a couple people cancel last minute so we will only need one boat now”. She never mentioned anything about “the couple of people” being nurses and pharmacy techs that couldn’t make it or mention anything about COVID-19. I called to give her the option to still use the second boat since we were going to have to charge her for it. She asked someone else that was near her and they said no. She then asked if they could reschedule the trip. I explained that if we rescheduled her charter trip and they ended up canceling it we would still charge her. She said she understood it’s the Captain’s livelihood and she would just stick with the original date (which was the next day) and they were only going to use the one boat and charger her for both boats. She was very nice and understanding and said she was looking forward to her charter the next day.

We are very understanding and had we known the circumstances, we could have some to an agreement.

This marina is a hidden jewel. Beau and his staff are great!

To book on Snag-A-Slip and earn rewards, explore these nearby partner marinas & private listings!
Marinas in South Carolina